Secrets of the Desert

The Nile valley in Egypt is a thin thread of fertility in an otherwise parched and desolate landscape. As a result, virtually all archaeological work in the last 200 years has been concentrated in the valley itself or along its edges where the pyramids and tombs are located. Little attention has been paid to the desert regions which constitute ninety per cent of modern Egypt.
We are all familiar with the jewels of Egyptian civilisation – the Pyramids of Giza, the Temples of Karnak and the Valley of the Kings with its golden treasure of Tutankhamun. But few of these splendours tell us much about the beginnings of Egyptian history.
The origins of pharaonic civilisation have always been shrouded in mystery. At its beginning there are no signs of the gradual development of metal-working, art, monumental architecture and writing – the defining criteria of early civilisation. It is almost as if the pharaohs and their complex culture came into existence overnight.
So what was the mysterious and sudden inspiration at the heart of the origins of Egyptian civilisation? The answer is to be found in the Eastern Desert which separates the Nile valley from the Red Sea. There, in the rugged sandstone mountains, remarkable clues have been found to suggest that newcomers arrived in Egypt towards the end of the fourth millennium BC – a couple of centuries before the foundation of the pharaonic state. These clues come in the form of hundreds of prehistoric rock drawings. They depict high-prowed reed ships and their crews. Warriors are shown dragging their vessels through the desert from the shore of the Red Sea towards the Nile valley. Some of the boats carry as many as seventy-five crewmen. These were not small river craft, but huge ocean-going battleships.
It appears that Egypt was invaded by seafarers from a distant land to the east, and it was these foreigners who were the crucial cultural and technological influence which triggered early civilisation in north-east Africa. I decided to mount a series of expeditions to relocate and record these amazing images from Egypt's most ancient past, which had last been seen over sixty years ago. 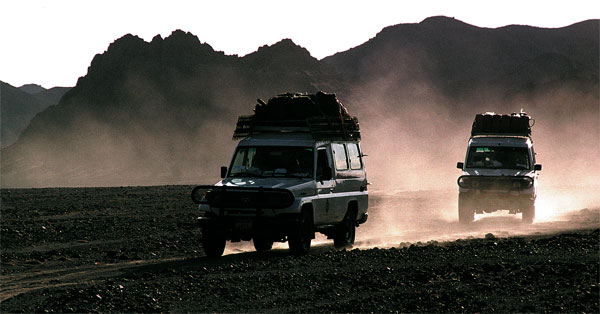 Heading off into the desert.


Expeditions into the Eastern Desert are difficult operations. They have to be completed in a very short time because essential supplies are soon used up. In these brief bursts of activity we have to be highly mobile, and the desert is only safe in late November through to early February when the snakes and scorpions are tucked up in their holes hibernating through the short winter.
Between January 1997 and December 1998 I had already undertaken three sorties into the uncharted mountains of the Eastern Desert. With an ever-growing team of recorders and back-up personnel, we had gradually mapped, surveyed and photographed over fifty prehistoric sites.
This time I had come with an expeditionary force of twenty-six, made up of volunteer recorders from the Sussex Egyptology Society, a team of experienced Egyptian drivers and a pair of talented beduin cooks. We were crammed into five Toyota Land Cruisers, roofs piled high with tents, food rations and those two most vital commodities - water and fuel. 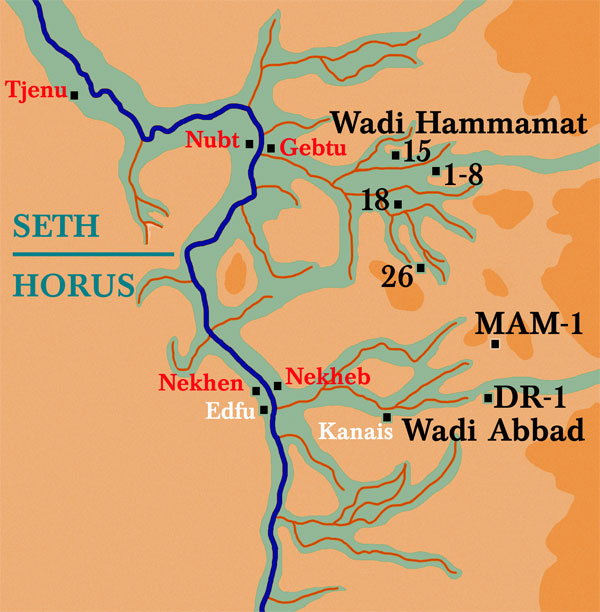 Wadis of Upper Egypt with the main rock-art sites marked.


We set off from Edfu on 20th January, heading east along the desert road to Mersa Alam on the Red Sea coast. Just beyond the little rock-cut temple of Pharaoh Seti I at Kanais we struck north-east into the wide mouth of the Wadi Abu Ashayir el-Atshan. Our convoy hurtled along, billowing clouds of dust in its wake. Within an hour we were deep into the complex wadi system which would be our home for the next five days. In prehistoric times these wadis were seasonal streams affording oases of shady refuge and life-giving water in an otherwise inhospitable environment. 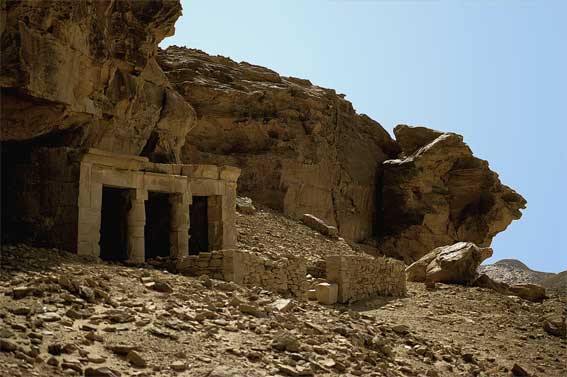 The temple of Kanais in the Wadi Abbad.
Over the last 5,000 years the mountains of the Eastern Desert have become desiccated and the wells bone dry. As a result, few Egyptologists have ventured into this harsh terrain. However, two hardy souls deserve mention because they were the first to find what we ourselves had come to record. 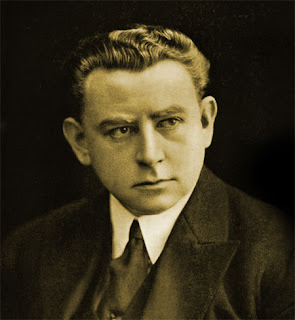 
In March 1908 British Egyptologist Arthur Weigall visited Kanais temple. He arrived by camel and spent a couple of nights camped in the ruins of a Roman fortress. In his book Travels in the Upper Egyptian Deserts he mentions the discovery of early rock-art carved on the cliffs and boulders nearby. Weigall published a couple of plates of ink drawings showing boats with high prow and stern, several carrying human figures or animals. This was the first occasion that these amazing Eastern Desert boats were revealed. 
Thirty years later the German explorer, Hans Winkler, headed off to the Wadi Hammamat region, east of Luxor. He too found examples of the high-prowed boats scattered along the ancient tracks through the mountains. Winkler spent several weeks exploring the area and logged thirty-nine sites and scores of boats. Unfortunately, the final publication of his research was a meagre affair with very brief descriptions, a few photographs, a set of ink drawings and a completely inadequate map of the site locations. It was obvious to me that his amazing discovery needed to be properly recorded and published for posterity.
By four o'clock our convoy had travelled eighty kilometres from the asphalt road at Kanais. It was time to establish our camp-site and get some well-earned rest. We pitched our tents on the only soft sand we could find and bedded down for the night.
By eight o'clock the next morning we were at the entrance to the 'Canyon of the Boats'. Here, in the shade of the sandstone cliffs are dozens of rock-drawings previously unknown to Egyptologists. Again, they depict large high-prowed reed ships, as well as hunting scenes, goddess-like female figures with arms raised above their heads and chieftains with tall-plumed head-dresses. We do not know what event is being depicted or why these extraordinary illustrations are to be found here in the vastness of the Eastern Desert, but these prehistoric rock drawings, now coming to light, have an important story to tell if we can only interpret the evidence correctly. They left their images here in the Eastern Desert and it is up to us to try to understand who they were.
Three hours of careful logging of the exact location by satellite GPS (Geographical Positioning System) and recording the details of the drawings was all the time available before we had to strike north once more in the direction of the black mountains of Gebel esh-Shalul. There we stopped for a late lunch in a narrow gorge and the team examined and copied a short hieroglyphic inscription pecked out on the smooth rock-face. The readable part of the pharaonic text said 'Overseer of the goldmines, Amenhotep' - evidence of a mining expedition into the ancient gold fields which were scattered all around here but are now
completely exhausted.
Refreshed, fed and watered, it was time to clamber back into the four-wheel drives and head out into the Wadi Zeidun which sweeps round in a great arc before spilling into the wide expanse of the Wadi el-Kash drainage system. On we went, sometimes at break-neck speed over hard, flat ground, at other times crawling through the soft sand and dense shrub of the wadi bed which snaked across our path. Three hours later, as sunset was fast approaching, we pitched our tents at Camp Two on a sandy dune flowing down from the craggy peak behind us. The lonely isolation and sheer scale of the setting demanded that we christen this beautiful place. I decided upon 'Tranquility Base' after the first landing site on the moon. It somehow seemed appropriate.

Arriving at Tranquility Base.
Like a wagon train from the wild-west the vehicles had been arranged in a semi-circle to afford some protection from the cold wind of the desert night. The open end of our corral looked out across the plain to the mountains from which we had recently exited. We huddled by the flickering camp-fire enjoying hot coffee in battered enamel mugs. The eighty-degree daytime temperature was rapidly dropping as a canopy of stars began to appear above our heads.
In today's street-lit world we have lost all sense of the astonishing beauty of the night sky. Only in places such as this, hundreds of miles from civilisation can you witness the true glory of the heavenly realm. The ancient Egyptians believed that the stars were the myriad transfigured souls of the dead.
Another early morning start enabled us to reach the Wadi el-Kash by eight-thirty. After travelling westwards for twenty kilometres we turned south. Two hours of tortuous manoeuvring through a tangle of rocks and pristine sand-dunes saw us into a wide wadi with a rich vein of vegetation running down the middle. This suggested that in ancient times there may have been a spring or perhaps even a small lake here. 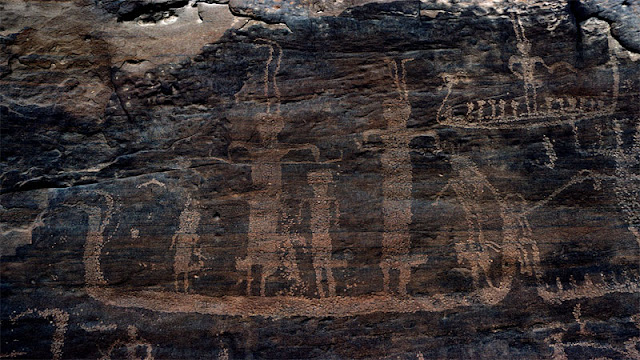 
The main rock-face at Site 26 is covered in extraordinary art. At the centre is a large boat (over one metre in length) in which stand five figures. The two tallest wear plumes on their heads and carry bows in their hands. Two of the smaller figures appear to be children. The fifth is a navigator who stands at the prow facing forward. He has a goatee beard and animal skin wrapped around him. These people appear to have been marked out as special – perhaps the family of the chieftain who led the expedition into Egypt.
Up and to the right of the main boat is another smaller vessel with eleven crewmen and a chieftain figure carrying a throw-stick shaped like a boomerang. He too has tall twin feathers on his head. Another scene, on a small rock below the main wall, depicts a dancing goddess with raised arms standing in a boat being dragged by five figures. 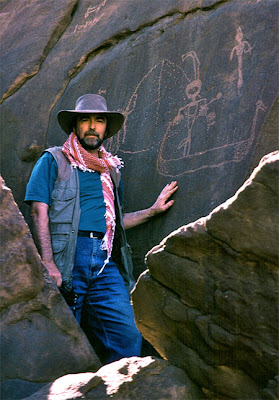 'Mace-Man' (on the rock face) in his high-prowe boat.
On the opposite side of the wadi is a drawing of a chieftain in a boat with an animal's figurehead at the prow. The chieftain wears two plumes and carries a pear-shaped mace. The latter is a typical Sumerian weapon which was unknown in Egypt before this time – an important clue as to the original homeland of the boat people.
The hidden wadi in which Site 26 and the other rock-drawings are located is a treasure house of prehistoric art, so much so that we have dubbed it the Wadi Abu Markab el-Nes – the 'Valley of the Father of the Boat People'. Its exact location is known only to a few and we believe that our expedition is the first to reach the place since Hans Winkler discovered it in 1937.
What we and our predecessors have discovered in the Eastern Desert is evidence of one of the most remarkable epic voyages of ancient times. We are still trying to piece together the story from the visual fragments and later epic literature of both Egypt and Mesopotamia. This last part of their journey, through the parched desert mountains towards the Nile valley, was astonishing. By dragging their huge reed ships from the Red Sea to the Nile, these foreigners, with their new weapons and culture, came to settle in Africa and, in doing so, became in effect the pharaonic culture which was later responsible for the pyramids of Giza and, ultimately, the treasures of Tutankhamun. 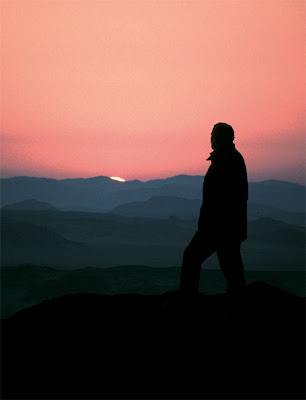